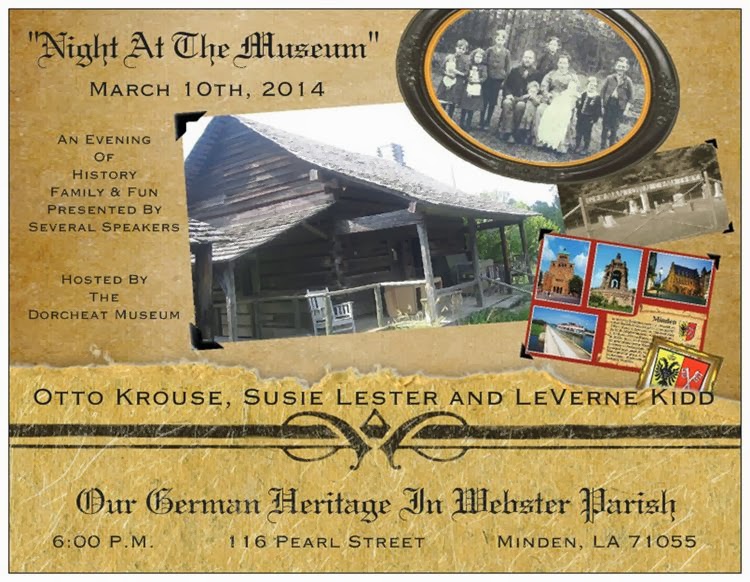 The 41st “Night at the Museum” will take place Monday March 10th, 2014.  This event will feature several guest speakers, including Webster Parish Mr. John Agan, Mr. Otto Krouse, LeVerne Kidd and Susie Lester.  We will learn much about Minden’s German heritage and influences that are still here today.  Most Mindenites have grown up knowing that Minden has a sister city Minden, Germany and most are familiar with Germantown Colony.  Many are not aware of what it was like to be of German decent in the United States during WWII.  This subject will be the main feature of the talk.
The Germantown Colony and Museum is an historical preservation project north of Minden. It was among three sites in Louisiana founded by former members of the Utopian Movement called the Harmony Society in the early 19th century. The original colonists came from Germany having first settled in Harmony, PA in 1803, then in New Harmony, IN in 1814, and finally in 1825 in Economy (now Ambridge, PA).
About 250 former members of the Harmony Society, many of whom left Economy, Pennsylvania, during 1832, decided to leave because of disagreements over the society's customs. They followed a visionary named Bernhard Muller, who called himself "Count de Leon". The Count called upon all the heads of Europe to relinquish their crowns in a "new world to come."
Some community members would eventfully follow Müller and his family down the Ohio River via flatboat. They later started up again at Grand Ecore, twelve miles north of Natchitoches, Louisiana. There Müller died and was interred in Natchitoches Parish. When the Count died, a congressman obtained passage of a bill donating a tract of land to the colonists and to Countess Leon, the Count's widow. The roots of the Germantown Colony were hence established.
In 1835, the group, then led by Müller's widow, the Countess, settled seven miles northeast of Minden in what was then Claiborne Parish.  For nearly four decades, the colony operated on a communal basis until it dispersed in 1871, when Webster Parish was created from Claiborne Parish. The Countess then moved to Hot Springs, AR., where she died in 1881.
The colony and cemetery thereafter was maintained by members of the Krouse family, including Dr. Francis Otto Krouse.  In 1954, then Governor Robert F. Kennon unveiled a still standing historical marker of the Germantown Colony. The sign is located at the intersections of Broadway, Elm, and East and West streets, across from the Webster Parish Library. Today the historic Germantown Cemetery holds the remains of many of the settlers. Tombstone information reveals that a number were born in Germany. In some cases, the cause of death is listed on the markers.
In 1973, Krouse descendants, including Chester Phillip Krouse (1899–1981) and his sister, Ruby Florence Krouse (1906–2005), donated an acre of land to the Webster Parish Police Jury.  Three of the original buildings, the Countess’ cabin, the kitchen-dining hall, and the Dr. Goentgen cottage, survive at the site. The buildings contain items used by the early settlers.  Some of the original wallpaper remains in the large room of the Countess' cottage, paper which she had ordered from New Orleans to cover the rough walls. A refined woman, the Countess gave piano instruction to girls and young women in her cottage.
The Germantown Museum did not open to the public until May 10, 1975, with then former Governor Kennon, a Webster Parish native and a descendant of Germantown colonists, in attendance for the observation.  In 1979, the colony was placed on the list of the "Cultural Resources Worthy of Preservation" by the United States Department of the Interior.   As Germantown, the village was listed in 1979 on the National Register of Historic Places.
In 2008, the Louisiana State Legislature under Act 847 declared it appropriate for the state to operate the Germantown Colony and Museum.  On July 1, 2009, the museum switched from parish to state control. The Germantown Colony Museum temporarily closed on June 3, 2013, for the construction of a new visitor’s center. The museum expects to reopen in 2014. The new visitor’s center will provide a climate-controlled area to display artifacts used by the settlers. The renovation also includes restrooms and new office space.
Don't miss your chance to hear about some of Minden's earliest families. The museum events will be held in the Media/Learning room at the Dorcheat Historical Association Museum, 116 Pearl Street, Minden, La.  Museum doors will open at 5:30 p.m., with first-come, first-serve seating.  Program begins at 6:00 p.m., admission is free with potluck desserts and snacks welcome.
For more information contact Schelley Brown Francis at 318-377-3002 or visit www.museuminminden.blogspot.com to sign up for the museum email blast. You can also find the museum on Facebook. To learn more about Webster Parish's rich history visit the Dorcheat Historical Association Museum located at 116 Pearl Street in Minden. Museum hours; closed on Monday, Tuesday-Friday 10 a.m. - 4 p.m. (closed from 1-2 for lunch), Saturday CLOSED. The museum admission is free. Also open for special tours and rental by appointment.

Mardi Gras in Minden New Exhibit Is Up

John Collins Is The 40th Speaker For "Night For The Museum"

The 40th speaker for “Night at the Museum” at the Dorcheat Historical Association Museum had a packed house, in spite of the extreme weather forecast on Monday February 10th, 2014.  Museum director Schelley Francis commented, “I was worried about the night’s crowd a little because of the weather forecast.  I felt sure folks would come out to hear John Collins under normal circumstances, I just wasn’t sure if the weather would cooperate for us.  We also were hit last week with another issue that I was dealing with.  The outside portions of three heating and air units were stolen and I could not heat the back section of the museum.  This turned out to not really be an issue once people started coming in, as most were dressed warmly anyway.”
The evening started with a special presentation from a local businessman and hotel owner.  Mr. Jay Kumar presented a $5,000 check to Museum Board President Mr. Thad Andress to be used for a part of the renovation expense fund on the museum expansion project.  “Jay Kumar’s check was a welcomed gift!  We are excited with all of our donations big and small.  It takes a little bit of everything to keep the museum going.  We have had some large gifts given in the past and we are always thrilled when this happens.  We know not everyone can help this way so that is where the tips jar, the cookbook sales, DVD sales, and donation box come in.  Every little bit helps and every little bit is appreciated.  We don’t want anyone to feel like they can’t help or be a part in some way.” stated Schelley Francis.
Mr. John Collins spent the rest of the evening telling his stories from his early childhood days in Minden.  Most everyone in Minden associates the Collins family with what is now A.J. Price, Incorporated.  The company operates the local downtown “OLD WESTERN AUTO STORE” among two other locations in Minden and Benton.  The downtown location was opened by John’s grandfather, A.J. Price in 1936.  After A.J.’s retirement, his daughter; Mrs. Evelyn Price Collins was the owner/operator until her son; John became manager in 1970.  John has worked at the Western Auto store for most of his life.  He could be seen at the downtown store working after school, on weekends, holidays, and Saturdays since his teen years.  John told several humorous stories of events that have taken place during his days spent at the store.  This talk will be available on DVD for $10 at the museum soon.
The next night for the museum will take place March 10th, 2014 with a night of our German Heritage history. Don't miss your chance to hear about some of Minden's early families. The museum events will be held in the Media/Learning room at the Dorcheat Historical Association Museum, 116 Pearl Street, Minden, La.  Museum doors will open at 5:30 p.m., with first-come, first-serve seating.  Program begins at 6:00 p.m., admission is free with potluck desserts and snacks welcome.
For more information contact Schelley Brown Francis at 318-377-3002 or visit www.museuminminden.blogspot.com to sign up for the museum email blast. You can also find the museum on Facebook. To learn more about Webster Parish's rich history visit the Dorcheat Historical Association Museum located at 116 Pearl Street in Minden. Museum hours; closed on Monday, Tuesday-Friday 10 a.m. - 4 p.m. (closed from 1-2 for lunch), Saturday 10 a.m. - noon. The museum admission is free. Also open for special tours and rental by appointment.