Bring Your Class To The Museum

The Dorcheat Museum encourages the teachers of Webster Parish to bring your class rooms to the museum.
Click on pictures below to enlarge.
Please call us for more information and to book your class trip today!
318-423-0192 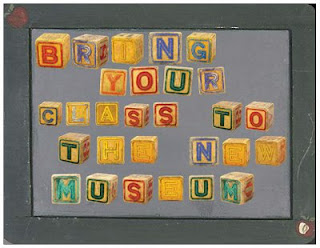 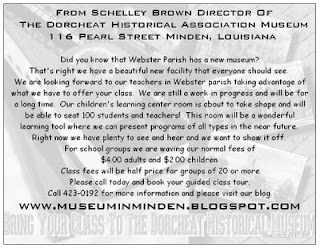 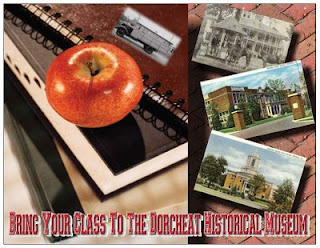 Posted by Schelley Brown Francis at 10:32 AM

1933 A Year Of Devastation For Minden 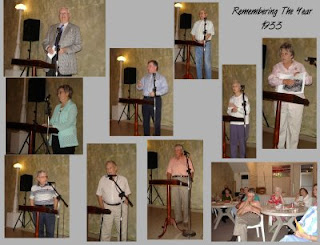 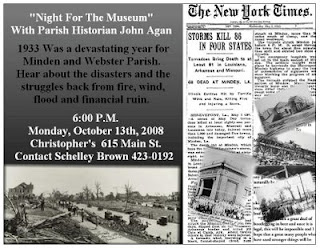 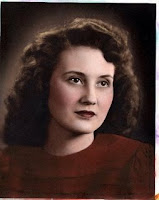 ciation’s monthly “Night for the Museum” to remember not only the event theme but to remember Mrs. Juanita Agan. The unexpected death of scheduled speaker John Agan’s mother was a shock to many in the Minden area. Museum director, Schelley Brown began the evening by urging everyone to sign cards for the family that were placed on each table and by telling everyone about the frequent calls shared with Mrs. Agan and how they always left you with a smile.
As the program began Thad Andress described the Juanita he knew as a child. Andress explained how Mrs. Agan and her beloved J.C. were an Andress Motor Company romance that would last a lifetime. Richard Campbell would continue with his memories of growing up in Minden and how loved and cherished Mrs. Agan was to so many. He also spoke of how priceless she was to those that love history.
The theme for the October event was the disasters of that year and the toll it took on Minden and Webster Parish. Dr. Campbell then began the program with a reading of a 1933 newspaper to set the tone. Webster Nation was the first one from the crowd to get up and tell his story. He was a young boy just wanting to play a game of baseball that day after school. He was stopped from leaving the house by his father. This act possibly saved his life. He described the scene with such emotion that you could feel the fear that was felt that day. He described in detail the sights and sounds of that terrible day. He said as long as he lives that he will never forget that day of having to go down into a crowded storm cellar with family and neighbors. Mr. Nation was also a classmate of Mrs. Agan and he spoke of her with the affection of lifelong friends.
Betty Lowe was next in line and she told how she and her family saw the storm approaching from Cotton Valley. Neighbors gathered in their large home that would later be almost totally destroyed by the cyclone. She told how they lived with neighbors and in two tents supplied by the Red Cross until a home was rebuilt for her family.
Joan Willey Luck, Eugene Allen, Dr. Steve Kirkikis, Marcus Wren and Faye Gordon all took the stage to tell of the death and destruction that followed the worst tornado to ever hit the state of Louisiana so many years ago. They also shared memories of what Mrs. Agan had meant to them. A tour of the 1933 museum exhibit was taken at the program’s end.
The 2nd Monday in November “Night for the Museum” will be an evening with the Bossier Parish Historian Clifton D. Cardin. Mr. Cardin will be speaking about the connections between the two parishes. For more information on the Dorcheat Historical Association and Museum contact Schelley Brown at 318-423-0192 or visit the web site at http://www.museuminminden.blogspot.com/ . A DVD of each event is available at the museum located at 116 Pearl Street.


Large Turnout Expected Again For “A Night for the Museum” with Mr. John Agan
Monday, October 13th, 2008, “A Night for the Museum” will be a special night for history lovers. John Agan, lifelong resident, local author, newspaper columnist, history teacher and the official Webster Parish Historian will be the guest speaker at The Dorcheat Historical Association’s “A Night for the Museum”. John is a 1976 graduate of Minden High School and earned a B.A. in History, a M. Ed. in Social Studies Education and a M. A. in History from Louisiana Tech. He did work toward his Ph.D. at both the University of Mississippi and LSU. He is currently an Instructor of History at Bossier Parish Community College . He has written three books on local history and since 2000 has written a weekly column on local history for the Minden Press-Herald. He is a member of the First Baptist Church where he has served as a Deacon and Sunday School Teacher and currently serves on the Board of Trustees. John is also am a member of the Minden Cemetery Association Board, the Germantown Colony Museum Commission, the Advisory Board of Cultural Crossroads and the Board of the Dorcheat Historical Association. Mr. Agan was appointed by the Police Jury as the designated official historian of Webster Parish.
Don’t miss this exciting and entertaining evening of hearing our history. This informative night dealing with Webster parish history during the 1930s should be another huge success. The monthly gatherings of history fans have been held to a packed house almost since it began over six months ago. Museum coordinators are again expecting a large turnout, so you may want to bring your lawn chairs just in case of a shortage of seating! “John Agan and his mother Juanita Agan have such a keen memory for detail. Minden is so lucky to have them both and we should be so appreciative of their work and knowledge. I don’t know where I would be with some of my projects without them. “Ghost Walk”, that benefits the Minden Cemetery , would never have happened without John helping me every year with scripts and information. The Dorcheat Museum would be in the same shape, I am afraid, without John’s knowledge.” stated Brown.
Our Webster Parish historian will be speaking on the subject of the new museum exhibit “The Disasters of 1933”. That year was especially tragic for Minden and the entire parish, as well as many other parts of the country. The “Great Depression” was in full swing for many, with droughts and flooding not much help to farmers. Banks failed and people struggled. Hear how Minden citizens survived bank failures, tragedy of fire, floods, and tornado. Minden later would triumph over all these events to become what we know and love today.
For this event museum director, Schelley Brown is encouraging everyone that remembers the 1933 disasters to come and have your story recorded. “This is a rare opportunity to get our oral history of this year down for posterity. Phil Demaline will be on hand making this recording possible. We want those that remember stories that were told to them, as well as those that were actually there, to stand up and tell us what happened to them. All of this will be a huge help with our new exhibit. We have an actual news reel from 1933 that shows live footage of the tornado of 1933 damage and the aftermath of the storm, but it has no sound. These real accounts can greatly enhance this exhibit.” stated Ms. Brown.
Mr. Agan will be speaking at Christopher’s located at 615 Main Street in Minden , Louisiana . Refreshments will be provided by Charlotte Martin and sponsored by Ty Pendergrass of Argent Financial. Refreshments will be served at 6:00 P.M. An opening welcome will be given by Mr. Thad Andress, President of the Dorcheat Historical Association & Museum, Inc. Everyone is encouraged to arrive before 6:00 P.M. for seating. Program will begin at 6:30. A large gift basket with a value of over $200 will be given away to a lucky attendee at the end of the evening! Also a raffle drawing for a two- night stay (value $378) at the McKay House B & B in Jefferson, Texas will be held.
Admission is free of charge and everyone is welcome. For more information on “A Night for the Museum with Mr. John Agan” please contact Schelley Brown at 318-423-0192 or visit http://www.museuminminden.blogspot.com/ . Reservations not required. First come, first served seating

The Dorcheat Historical Association Museum Needs Your Help with The Disaster of 1933 Exhibit !

The Dorcheat Historical Association Museum is currently working on its new exhibit “The Disasters of 1933”. “This exhibit is a very important element in the museum timeline.” stated museum director Schelley Brown. This new exhibit is the work of local artist Larry Milford and includes not only a Tornado and Fire display but will also include sound effects and a live footage news reel that will be played on a small screen TV. “What we are working on now are the stories from the people that lived through this time in our history. We want to get these stories recorded at our next “Night for The Museum” which will take place on October 13, 2008 at Christopher’s on Main Street. We are encouraging everyone that remembers these 1933 events to please come out for this evening of history. We also are looking for pictures and artifacts from 1933. We hope that people will remember that they have old photos or items that were saved from the tornado or fire to come forward and help us make this new exhibit something we can all be proud of. Minden suffered a great many disasters that year with failing banks, fires, floods, and then the worst tornado on record to hit the state of Louisiana. To come back from all of that says a lot about the type people Webster Parish citizens were and still are.” said Ms. Brown. For more information about the museum you can contact Schelley Brown at 318-423-0192 or visit the museum blog at www.museuminminden.blogspot.com Remember this is your museum!

Posted by Schelley Brown Francis at 8:57 AM