Dorcheat Historical Museum Making Great Progress In Just 19 Months
The Dorcheat Historical Association Museum is the culmination of a dream that began in the fall of 1974, when, under the leadership of Mrs. Beth Drew White, the organization w 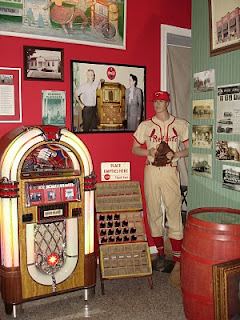 as formed to preserve the history of Webster Parish. Through the ensuing years the organization suffered many setbacks and trials, but the museum now represents a triumph over these difficulties. Today these dreams have turned into reality, with the purchase of a building from the DePingre family the museum is here to stay. This mortgage-free building now houses and preserves our history for our future.
The official museum of Webster parish opened its doors located at 116 Pearl Street in Minden, La. on June 10th, 2008. At that time, only a very small portion of the front room was complete. After a year of renovations and a year of raising awareness of our local parish history the Dorcheat Historical Museum Board of Directors decided that is was time to open the doors to show people what had been accomplished and what the plans were for the future.
Since 2007 local artist Larry Milford has made great progress in his overall vision of what each exhibit depicts and how it explains our local history. Museum director Schelley Brown has made additions to the museum with sound effects and video presentations on many of the exhibits. Brown stated, “This past summer I was able to go to the Smithsonian Museums, Mt. Vernon, the United States Holocaust Memorial Museum, Gettysburg and many other historic sites, to see if what we were doing on a small scale measured up to these grand exhibits. I was pleased to see that some of what we have incorporated in our exhibits is in line with the large scale exhibits in these well known places. Museums are not quiet places to look at artifacts these days. They are filled with interactive, sights and sounds.”
“We have spent well over $300,000 in the past few years. From 2007-2010 the museum has received several substantial grants from Webster Parish Convention and Visitors’ Bureau, Webster Parish Police Jury, the City of Minden, Coca-Cola Bottlers Association Foundation, Cultural Crossroads, Louisiana Main Street Program, Louisiana Endowment for the Humanities, and the Jr. Service League. All of these grants help greatly with research, exhibit construction and building repair cost. While those grants are extremely important private funding from individuals’ plays a very important part in the great progress we have achieved. These individual type donations are the ones that keep us operating on a day to da 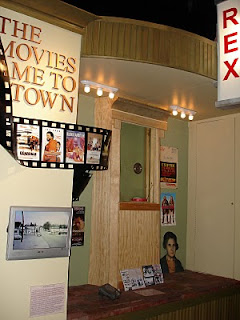 y basis. We have had some very generous people that are committed to this project and a few generous volunteers and others that have donated their services and time.” commented Brown.
Brown stated, “The fundraising and membership drives never stop with a museum. Dorcheat Museum is constantly working to increase members, donations, and events to raise money. My goal is to have everyone in Webster Parish become at least a $20 a year member, buying one of our products, coming to one of our many events or visiting the museum. We still have work in the front to be completed, back theater room to finish and our military exhibit just to name a few. We estimate spending at least another $100,000 this year on exhibits to get where we want to be. A museum is never complete!”
More progress has been made by the recent hiring of Ms. Eddie Hammontree, retired director of Webster Parish Library. Ms. Hammontree is now cataloging the museum collection into the Past-Perfect IV museum software program. This program will be helpful to anyone doing research in the future. Eventually the museum hopes to have the museum collection online. The Bossier Parish museum uses this same software for their online collection.
The third season of speakers will begin in February. For two years the popular “Nights for the Museum” were free to the public. With the increase of postage and printing the museum board felt the need to charge a small fee of $5 per event for the 2010 season, while nearby areas charge much more. Brown stated, “Our first year and into our 2nd year Ty Pendergrass and Argent Financial funded the food for the events. Museum board member, Charlotte Martin was put in charge of refreshments. As the crowds grew by leaps and bounds, we felt it 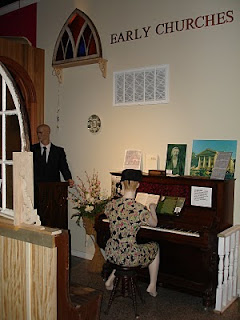 was time to make a change and everyone that attends the events agreed. The events now are potluck, giving the feeling of the close-knit community that we are. Everyone loves coming with something they have prepared special for the evening.”
Many are familiar with the popular cookbooks, Cora Lou Robinson prints, DVD speaker series and books that the museum offers as fundraisers. Another way that they also raise money is with the car show that Schelley Brown created in 2004. Brown stated, “I started the show in 2004 to give back to my community in the best way I knew how. I had always given money to St. Jude Minden Auction and so this was a way to for me to add extra to that. Many times after that first year because of the amount of work involved in putting on the show, I considered to cease doing it. By the third year it had gotten too big to stop. It takes almost a year to plan this show and involves a great deal of work. Anyone that is involved with me knows the amount of time that is spent in putting on the May show. I had been asked by several organizations in the past to put on shows and events for them including the Dorcheat Historical Associa 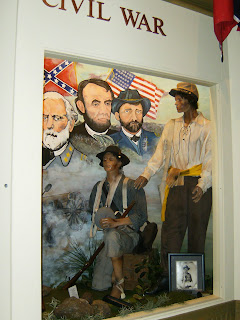 tion. I turned many of them down because of the time involved. When the Dorcheat Museum Board hired me they asked if I would continue doing the show. I really wanted to stop at this point but since I was hired to raise money for the museum I instead decided to change the name and type of this show and redirect where some of the net proceeds went. The show this year gives money to St. Jude in fact we have given $73,000 since 2004! St. Jude is a wonderful cause that I feel strongly about. In the future I have thought about giving half of the money to the Susan Komen foundation for Breast Cancer research. Giving to any cancer research is something that I feel strongly about. I think it is only fair that the Dorcheat Museum benefit for the amount of hours that are spent on this show by me. (The show has given $13,000 to the museum so far) After all they are paying my salary while I work on it. The name of the show now is “Cruisin’ for a Cure Wheels Through Time Show and Shine”. I left the words “For A Cure” in the title because I will always give half of the money to something dealing with some type of illness or disease. It is no longer just a car show it is now a car, motorcycle, tractor and anythi 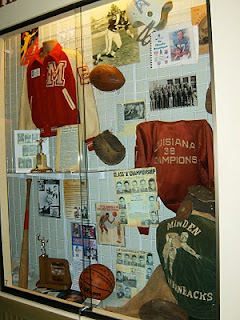 ng that rolls show & shine. Show and shine means it is no longer a judged show.’ For more information go to http://www.mindencruisinforacure.com/ or http://www.mindencruisinforacure.blogspot.com/
The museum board is currently made up of President; Thad Andress, Treasurer; Richard Campbell, Secretary; Ann Harlan, Charlotte Martin, Janet LaBruyere, Marcus Wren, Cristola Walton, Pat Stephens, Louise Snook, Webster Parish historian: John Agan, Cora Lou Robinson, Ben Hunter, Dr. Roy Phillips, James H. Smith, Carleton Prothro, Lonnie Simpson, Ronnie Broughton, and Richard Noles. “As of our January meeting we are currently looking for a few new recruits to join our board as working volunteers”, stated Brown. Anyone with an interest in history and preservation is asked to drop by the museum or call 318-377-3002. For more information on the museum visit 116 Pearl Street from Tuesday – Saturday or visit http://www.musueminminden.blogspot.com/
Posted by Schelley Brown Francis at 1:42 PM 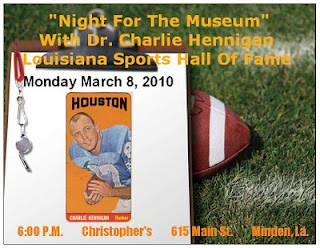 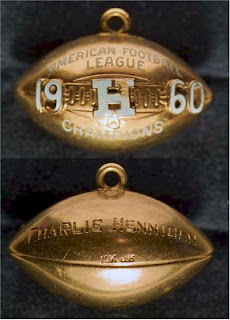 March 8th, 2010, “Night For The Museum” will be one you don’t want to miss. Louisiana Sports Hall of Fame member Dr. Charlie Hennigan will be the second in the 2010 series to speak at Christopher’s in downtown Minden. These popular events have drawn an average crowd of around 200 per evening. “Many of our guests come from all over the country. The museum board is so pleased with the response from the community.” stated Schelley Brown.
Many remember Charlie Hennigan as a 1953 Minden High School graduate that went on to become a record breaking football player for Northwestern State University and the Houston Oilers. Others remember him as part of “The Dirty Six”, a group of young, rambunctious boys that ruled the neighborhood known as “Oak Ridge Addition” off the Shreveport Road. However you remember him, you always remember his wit and humor and love of the game and his friends in Minden.
Charlie Hennigan played with the Houston Oilers in their first year, 1960, after having worked as a schoolteacher. He scored the first touchdown in Oilers history, but played in only 11 games. After a promising rookie season, in 1961 he started all 14 games and established himself as a superstar in the American Football League by gaining 1,746 yards receiving, a record that stood for 34 years. Hennigan was the first professional football player to catch more than a hundred passes in a single season (101 in 1964) and to twice gain over 1,500 yards in pass receiving (1961 and 1964).
He holds the all-time records for most games (3) in a season with over 200 yards receiving, and most games (11) in a season with over 100 yards receiving. Hennigan had the All-time AFL single game record of 272 yards receiving, against the Boston Patriots on October 16, 1961. He was an American Football League All-Star five straight years, 1961 through 1965, and is a member of the All-Time All-AFL second team, and a member of the Louisiana Sports Hall of Fame He went on to a successful career with a Doctorate in Education, and as a motivational speaker and teacher.
Events are held at Christopher’s, 615 Main St. in downtown Minden, La. Doors open at 5:30 with refreshments served at 6:00 p.m. Admission to each event is $5.00 per person. First-come, first-served seating. Guests are welcome to bring their favorite appetizer or dessert. For more information contact Schelley Brown at 318-423-0192.
Posted by Schelley Brown Francis at 1:50 PM