Night at the Museum with Denton Culpepper Canceled

Due to Covid-19 all museum speaker events and gala will be canceled for 2020. Our patrons are important to us. We feel that the museum meeting room is not large enough to safely social
distance.

September 14th, 2020 Night at the Museum to feature Denton Culpepper 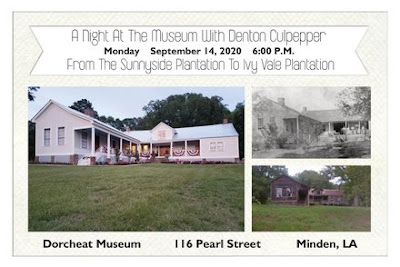 Don’t miss the 69th Speaker for the Dorcheat Museum.  Denton Culpepper will be the Sept 14th, 2020 speaker for the May 2020 museum event.  Due to the Covid-19 this event was changed from May to Sept in hopes that things will be better. 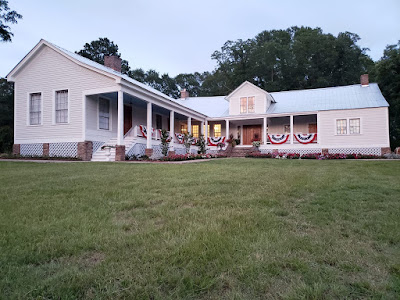 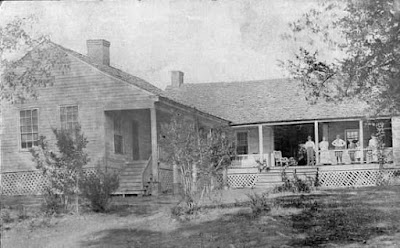 Denton Culpepper was born and raised in Dubberly, LA about two miles from what is now his “Ivy Vale Plantation”.  Growing up Culpepper always dreamed of restoring and owning an old plantation home.  In 2017 he would purchase what had become known to most locals as the “Old Shadows House”.  This once run down and neglected property is located in Dubberly off Hwy 531.  It has taken about one and a half years to restore the house to the showplace of a home and wedding venue that it is today.  Much attention to detail has taken place to keep things as they were while at the same time making it a wonderful place to call home for Culpepper.

This presentation will detail the harsh environment and daily struggles that early pioneers had to overcome to settle this area, as well as how the planter class forever changed the culture and landscape of North Louisiana. You will see how a plantation arose from a small log cabin and how everything but the hinges and glass panes of the windows were made and assembled on the plantation.

Don’t miss your chance to hear an amazing part of North Louisiana history.  The museum events are held in the Media/Learning room at the Dorcheat Historical Association Museum, 116 Pearl Street, Minden, La.  Museum doors will open at 5:30 p.m., with first-come, first-serve seating.  Program begins at 6:00 p.m., admission is free with potluck desserts and snacks welcome.

For more information contact Schelley Brown Francis at 318-377-3002 or visit www.museuminminden.blogspot.com to sign up for the museum email blast. You can also find the museum on Facebook as a group and a page. To learn more about Webster Parish’s rich history visit the Dorcheat Historical Association Museum located at 116 Pearl Street in Minden. Museum hours; Tuesday-Friday 10 a.m. – 4 p.m. (closed from 1-2 for lunch). Open by appointment only on other days. The museum admission is free. Also open for special tours and rental by appointment.