“One of Minden’s Great Mysteries”
The Dorcheat Historical Association Museum held its second “Night for the Museum” for the 2011 series of speakers to a history seeking group on Monday night, March 14 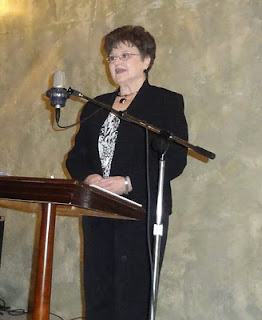 th, 2011. The event highlighted the life of one of the South’s and Minden’s forgotten literary greats, Ada Jack Carver Snell. Snell was the subject of Dr. Donnis Taylor’s doctoral dissertation, making Taylor the expert on the subject of Ada Jack Carver: that is to say if anyone can be on someone whose life was surrounded in mystery and reclusiveness.
Dr. Taylor’s extensive research on this woman that died in 1972 in a nursing home in Minden was evident. From the earliest writings of Carver, to her life at home with her parents, later her life here in Minden and then the tragic death of her young son were all highlighted in the evening’s museum event.
“I think everyone really came away with a feeling of who, what and why about Ada Jack, especially after hearing the tragic story of the scalding death of her child.” commented an attendee of the night. The whole story of Carver may never be truly known, but Dr. Taylor’s work has uncovered many unanswered questions and cleared up dates and contradictions of the past. Carver began to publish in 1915, but her most intense creative activity occurred in the mid-1920s with works published in Harper’s and several other well-known publications of that era. There will always be numerous unresolved mysteries surrounding the relationship between her life and her work. Ada Jack Carver Snell died in December of 1972 and is buried at the Minden Cemetery by her husband and infant son.
If you would like to hear the story as told by Dr. Taylor you can contact the museum for your copy of the DVD for $10 each. For more information contact Schelley Brown at 318-377-3002 or visit www.museuminminden.blogspot.com . You can also find the museum on Facebook.

“Ada Jack Carver Snell, Minden’s Forgotten Literary Giant”, will be the subject of the March 14th, 2011, Dorcheat Historical Association Museum’s “Night For The Museum”. Dr. Donnis Taylor will be speaking about one of the South’s greatest women authors. Dr. Taylor was born in El Dorado, Arkansas and lived there until she moved to Ruston to attend Louisiana Tech. In the middle of her freshman year, she married Sonny Taylor, a Ruston native. In 1963, the couple moved to Minden, when Sonny was hired to teach and coach at Minden High School. Dr. Taylor began her teaching career in Webster Parish, spending one year in Dubberly and four in Sibley before transferring to Minden High School, where she is remembered by many for teaching English twenty-four years before “retiring” from the public school system to enter higher education.
She received both her bachelor’s and master’s degrees at Louisiana Tech, and ear 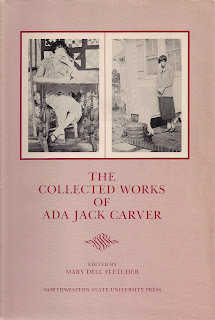 ned the Doctor of Philosophy degree at Southwestern Louisiana University (now the University of Louisiana at Lafayette). Shortly after her retirement from Webster Parish, she accepted a position at Southern Arkansas University in Magnolia, where she is presently an associate professor of English, teaching Comp I, Lit I, and Advanced Composition. Every three years, when Southern Lit is offered, she teaches that as well, which gives her an opportunity to teach the works of Ada Jack Carver, alongside those of other great Southern writers.
Taylor is an active member of the Arkansas Philological Association (APA) and in 2009 served as the organization’s state president. She has presented numerous papers at APA and other professional conferences, and most of them have been about Ada Jack Carver, the subject of her doctoral dissertation. Four years ago, Dr. Taylor was awarded a Southern Arkansas University faculty research grant, which enabled her to do even more extensive research on the Minden author. One of the results of that study was the publication of one of her papers on Carver in the nationally circulated Philological Review, a juried literary journal published by the Arkansas Philological Association. 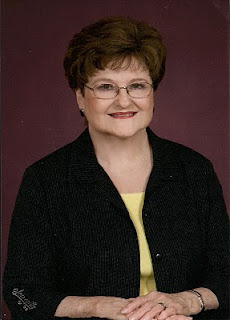 Ada Jack Carver Snell was born in Natchitoches in 1890. She married John B. Snell, in 1918 and moved to Minden. Born into an upper-middle-class Baptist family, Ada Jack Carver was raised in an atmosphere of distinction and ease in Natchitoches. The rich heritage and atmosphere of Louisiana’s oldest settlement filled her days as a youth. She would later remember these experiences with her colorful and descriptive writings of life in Louisiana.
Carver began to publish in 1915, but her most intense creative activity occurred in the mid-1920s with works published in Harper’s and several other well known publications of that era. There are numerous unresolved mysteries surrounding the relationship between her life and her work. Ada Jack Carver Snell died in December of 1972 and is buried at the Minden Cemetery by her husband and infant son.
Don’t miss your chance to hear about one of Minden’s most interesting past citizens. Event will be held at Christopher’s, 615 Main St., Minden, La. Doors will open at 5:30 p.m., with 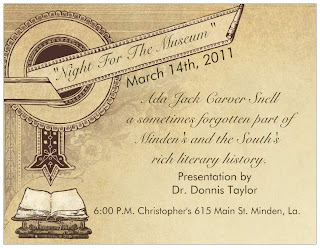 first come, first serve seating. Program begins at 6:00 p.m., admission is free with potluck desserts and snacks welcome. For more information contact Schelley Brown at 318-377-3002 or visit www.museuminminden.blogspot.com . You can also find the museum on Facebook.
Posted by Schelley Brown Francis at 1:26 PM

Standing Room Only For POW Stories

The Dorcheat Historical Association Museum held its first “Night for the Museum” for the 2011 series of speakers to a standing room only crowd, on Monday night, February 21st, 2011. The event highlighted the early life of Bill Barkas and first cousin, Dr. Mattie Jacks Mosley. Both of whom are POW survivors from WWII in Manila.
This event was a lesson in survival and being proud to be an American citiz 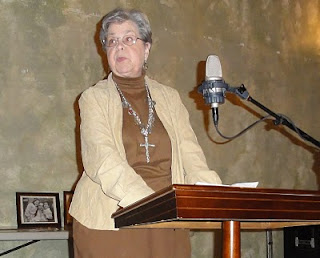 en. The crowd traveled back in time to the years 1942-1945 in war torn Manila. Mosely and Barkas described in vivid detail their experiences and earliest childhood memories of life in Manila during the war years. Barkas went on to include his pride in becoming an American citizen and what it means to him.
It was early Monday morning, the 8th of December 1941, just hours after the Pearl Harbor attack, Zero fighters of the Empire of Japan flew to the Philippines in tight formation from the north, directing their attention to Manila, bombing strategic military targets. Panic quickly surged through the city of 800,000. The civilians of Manila prepared for the worst as banks were mobbed; stores were quickly emptied of canned goods and supplies. Within a few days, the Commonwealth President Quezon quickly declared Manila an "Open City" to avoid further destruction of what was then known as the “Pearl of the Orient”.
During this time over 3700 Americans, British, Australians and other Allied civilians would be interned at the centuries-old University of Santo Tomas. Prisoners built p 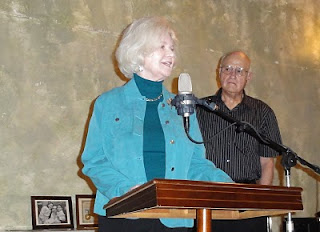 rivate shacks or shanties for their families around campus buildings, after the Japanese occupation of Manila, Santo Tomas main building was used to hold civilian POWs, and classrooms for sleeping quarters from January 4, 1942 - February 3, 1945.
These prisoners endured many hardships including the lack of food, water, and disease. Both Barkas and Mosely remembered the lack of food and water. Mrs. Mosley described how sick they became after they were finally given food, as their bodies became accustomed to foods again. Many were just skin and bones at their release including her parents. She said her parents would not let pictures be taken of them due to how much weight they had lost during the three year period.
Santo Tomas University was liberated by the US Army 1st Calvary Division (8th Regiment, 1st Brigade). Mrs. Mosely told of seeing General MacArthur in the streets and the thrill of being picked up by one of the first tanks rolling down the streets during the American liberation of the city. She described being scooped up by an American soldier and placed on the top of the tank as her parents followed behind. The first wave of soldiers was backed by five tanks from the 44th Tank Battalion. The university still educates to this day. A plaque, dedicated in 1954 tells the history of the main building as an internment camp.
The next “Night For The Museum” will be held March 14th, 2011. It will feature Dr. Donnis 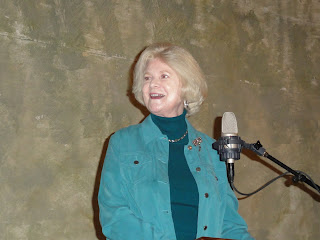 Taylor and with her presentation about Ada Jack Carver Snell. Snell is considered one of the South’s forgotten literary giants and one of Minden’s sometimes forgotten greats. 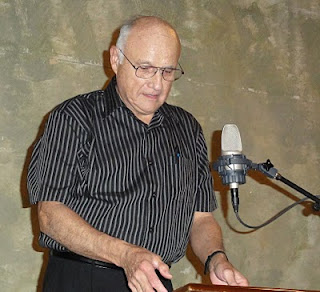 Events are held at Christopher’s, 615 Main St. in downtown Minden, La. Doors open at 5:30 with refreshments served at 6:00 p.m., free admission, first-come, first-served seating. Guests are welcome to bring their favorite appetizer or dessert. Drinks are provided. For more information contact Schelley Brown at 318-423-0192. Or visit the web site at 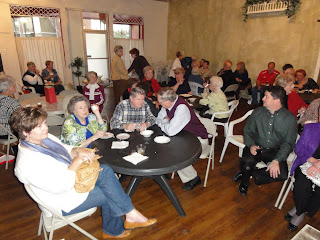 www.museuminminden.blogspot.com or join on Facebook.
Posted by Schelley Brown Francis at 12:38 PM