Hear local historian John Agan talk about the Dorcheat Museum on TalkZone Travel'n-On Radio. This tour was conducted on December 8th, 2009 click on the link to learn about the history of our area.
http://www.talkzone.com/archive.asp?aid=43038
Posted by Schelley Brown Francis at 10:21 AM 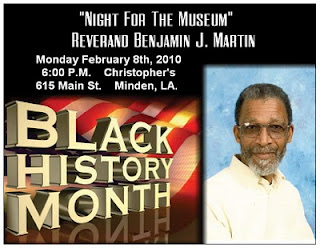 with the Reverend Benjamin J. Martin as the first speaker for the 2010 season. Museum director Schelley Brown commented that this year the museum will have a total of at least 6 speakers. The season begins with Black History in February followed in March with football great Charlie Hennigan. April is Confederate History Month and May will be a moving tale of World War II from the Elshout and Vandernoord families. There will be a summer break in June, July and August. We will pick up again in September, with the finale set for October. The popular events will be $5 per person this year with all money benefiting the Dorcheat Historical Association Museum.
Reverend Martin entered Morehouse College in 1959 on a Merrill Early Admission Scholarship after completion of the eleventh grade. He was awarded a Woodrow Wilson-IBM Graduate Fellowship to attend graduate school at Purdue University. Martin attended the Georgia Institute of Technology, and the Morehouse School of Religion.
Ordained to the Gospel Ministry in July of 1987, Reverend Martin moved to Minden in 1998 and followed in his father B.F. Martin’s footsteps as pastor of the Saint Rest Baptist Church. In the last 10 years the church has expanded outreach ministries to include Habitat for Humanity, medical and teaching missionaries to Jamaica, the Angel Tree project and many others. St. Rest Baptist Church was formed in 1865 and is one of the oldest churches in Minden. The history of St. Rest is an important part of our Webster Parish history.
Reverend Martin is also active in our community, serving as a member of Webster Parish Jury Commission, Webster Parish Community Services Board and Webster Parish Convention and Visitors bureau. Martin is also involved in scouting, is an amateur radio operator, a radio-controlled model airplane enthusiast and an avid gardener.
Posted by Schelley Brown Francis at 9:08 AM

City of Minden Supports The Museum 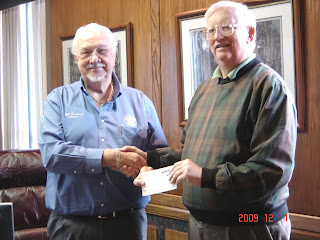 Mayor Bill Robertson proudly presents a check from the City of Minden to Thad Andress, President of the Dorcheat Historical Association & Museum, Inc. The Mayor and city council deem this an appropriate gesture for an organization that is dedicated to perserving our past for future generations. They encourage others to support the museum and museum activities by becoming members or simply through a a tax deductible donation. Mayor Robertson encourages everyone to visit the museum located in downtown Minden; it is a great place to learn about Webster Parish.
Posted by Schelley Brown Francis at 1:31 PM